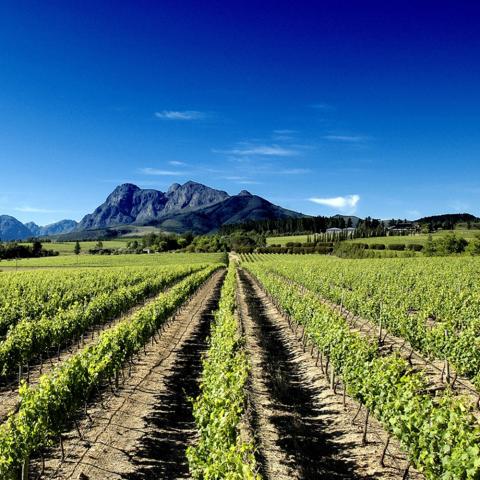 The boundaries of this ward include the historic Constantia estate, though the ward and the three wine estates later built upon the 750 hectares (1,853 acres) estate are separate entities. The Constantia ward is located south of Cape Town on the Cape Peninsula that juts out into the Atlantic ocean. Because of this location, the wine region receives oceanic influences on each side that creates a cooling effect that contributes to a long, slow ripening period in the summer where average daily temperatures fall between 18–19 °C (64–66 °F). Winters are often moderate and mild but wet with annual precipitation usually over 1,000 millimetres (39.37 in). The soil of the region is composed primarily of Table Mountain sandstone with high concentrations of loam and granite. The area grows a wide range of grapes with Sauvignon blanc being particularly noted.

The Stellenbosch district is the second oldest wine region in South Africa, after Constantia, and is responsible for around 14% of the country's annual wine production. First planted in 1679, Stellenbosch is located 45 kilometres (28 mi) east of Cape Town. The region is surrounded by the Helderberg, Simonsberg and Stellenbosch Mountains and receives some climatic influences from nearby False Bay. The bay tempers the climate and keep average temperatures during the summer growing season to around 20 °C (68 °F), just slightly warmer than Bordeaux. Vineyard soil types range from decomposed granite on the hillside near the mountains to sandy alluvial loam in the valleys near the rivers.

For most of the 20th century, Paarl was for all practical purposes the heart of the South African wine industry. It was the home of the KWV as well as the annual Nederburg Wine Auction where the reputation of a vintage or an estate could be established. Gradually the focus shifted southwards to Stellenbosch where Stellenbosch University gained a more prominent role in the South African wine industry with its viticulture and winemaking programmes. The transfer of power from the KWV to a private business further shifted the focus away from Paarl. However, the terroir driven wines of its wards, the Franschhoek Valley and Wellington, have revitalised interest in the area in recent years.

The Breede River Valley, located east of the Drakenstein Mountains, is a warm climate region that can be very dry and arid in some places. The river itself provides easy access to irrigation which makes bulk wine production of high yield varieties commonplace. The Robertson district is located closest to the river along alluvial soils and the occasional calcium-rich outcrop of land. The average annual precipitation is generally below 400 millimetres (15.75 in), making irrigation essential. Temperatures during the summer growing seasonal normally around 22 °C (72 °F). The Bonnievale ward is the most notable sub-region of Robertson, noted for its Chardonnay and Shiraz wines.

The cool climate Overberg region has been the site of the most recent interest and development in the South African wine industry, particularly with increased plantings of Chardonnay and Pinot noir. The entire area received very little attention until the late 20th century and was not even classified in 1973 within the original "Wine of Origins" programme. The maritime climate of Walker Bay and the cool, higher elevation vineyards of Elgin located east of Cape Town have had success producing these varietals as well as Sauvignon blanc.